The Razor McGrath Dirt Rocket is designed to pay tribute to one of the most popular riders in motocross history; Jeremy McGrath. It has authentic graphics and it is very popular among anyone who loves motocross. However, due to the fact that it is an electric bike, many people worry that it may not be as good as it appears. We are here to tell you whether the bike is truly a great investment in your child’s fun and encourage you to read our full Razor SX500 McGrath Dirt Rocket electric motocross bike review. 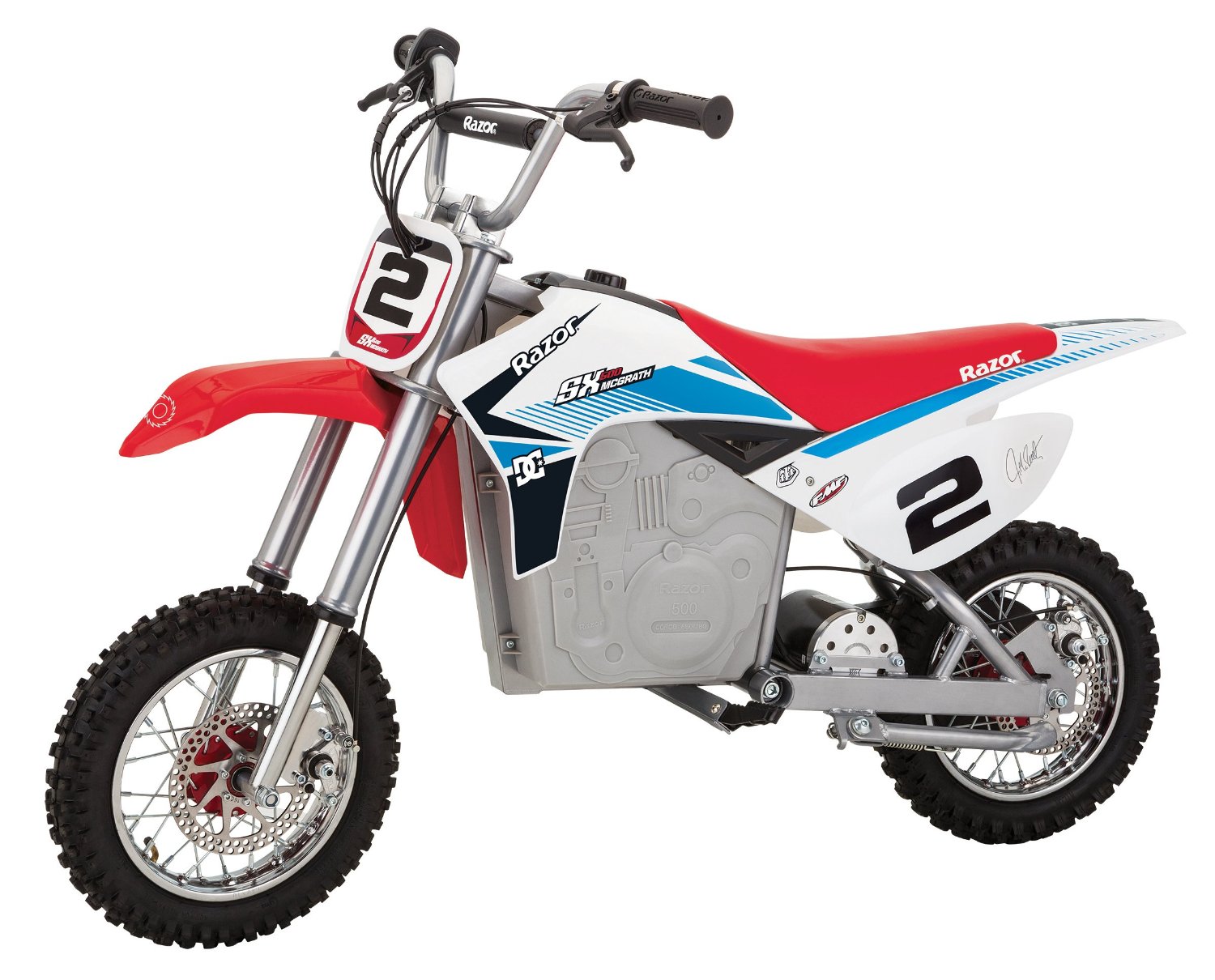 Features of the Razor McGrath E-Bike

This special edition McGrath motocross bike by Razor has the genuine dirt bike frame geometry and high-torque that you would expect from Razor. It also has a variable speed motor to give you a super-charged experience you will not soon forget.

The motor can travel at speeds of up to 15mph. The battery, when fully charged, can last for a full 40 minutes of ride time, when you are off-roading at full speed.

The McGrath motocross e-bike is recommended for ages 14 and up. It can support riders of all ages as long as they weigh less than 175 pounds. If you weigh more than that, the bike will travel slower than typical.

This is a comfortable riding bike thanks to the dual suspension and riser handlebars. It also comes with large pneumatic super-cross treaded tires, a retractable kickstand, and hand operated dual disk brakes. All of these features are designed to ensure safety and usability for anyone who wants to take it for a ride.

The Razor SX500 weighs in at 98 pounds. This weight can be attributed to the all steel frame and shatter resistant plastic fairings. Its' assembled dimensions are 56 x 24.5 x 36 inches. 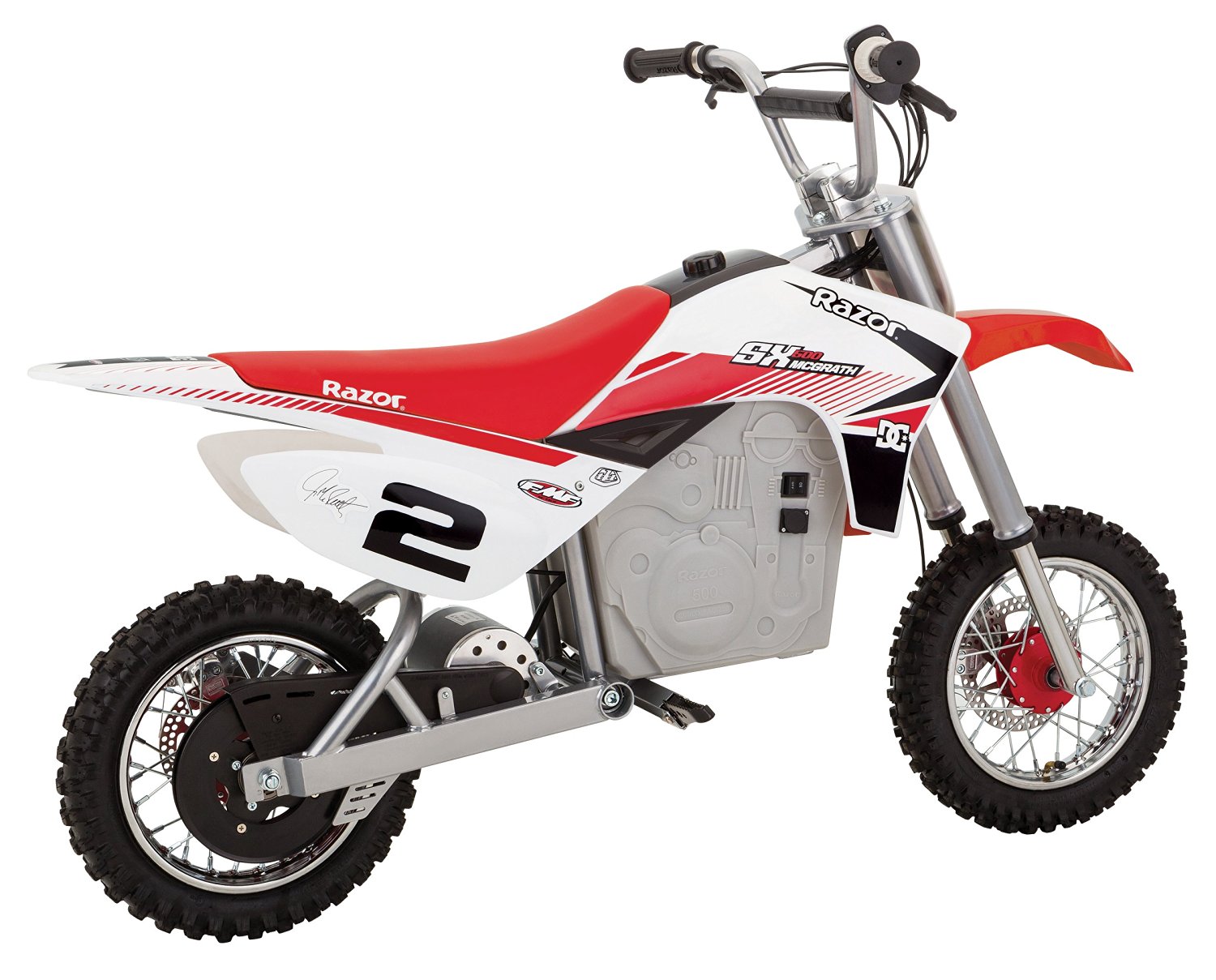 Do Owners Love the Razor SX500?

This bike holds a steady 4.2-star rating. In general, most people say that their child loves it and does not ever want to stop riding it.

Parents say it is awesome and the perfect bike for a beginner to ride on. Some parents do recommend that you purchase a helmet because the bike can go pretty fast, but so far, no one has been injured by the speed of this bike, even if they are younger than the recommended age. Some of the biggest complaints include the brakes being squeaky and the battery fails, eventually. The brakes squealing is often something that happens when electronic bikes are new and it continues until they are loosened up. As for the battery, this is a very common complaint. It could happen if you are taking the battery off charge too soon or simply the age of the battery. Many people have owned the bike for years and still complain when the battery doesn’t have the power it did when it was new.

Is The SX500 McGrath Perfect for Your Family?

The McGrath electronic bike is not perfect for everyone, but it is enjoyable for most families. Some people will love the price of it and others will love the simple fact that it is a limited-edition bike. There are going to be people who want it simply because it is a good looking Razor motorbike. In all cases, it is a great bike for anyone who has a young person living with them who wants to learn to ride like the pros. It is also ideal for people who want to give their child the thrill of a dirt bike without the extreme price of owning it. More about the Razor SX500 McGrath here⇒

Smart Balance Board With Bluetooth Speaker